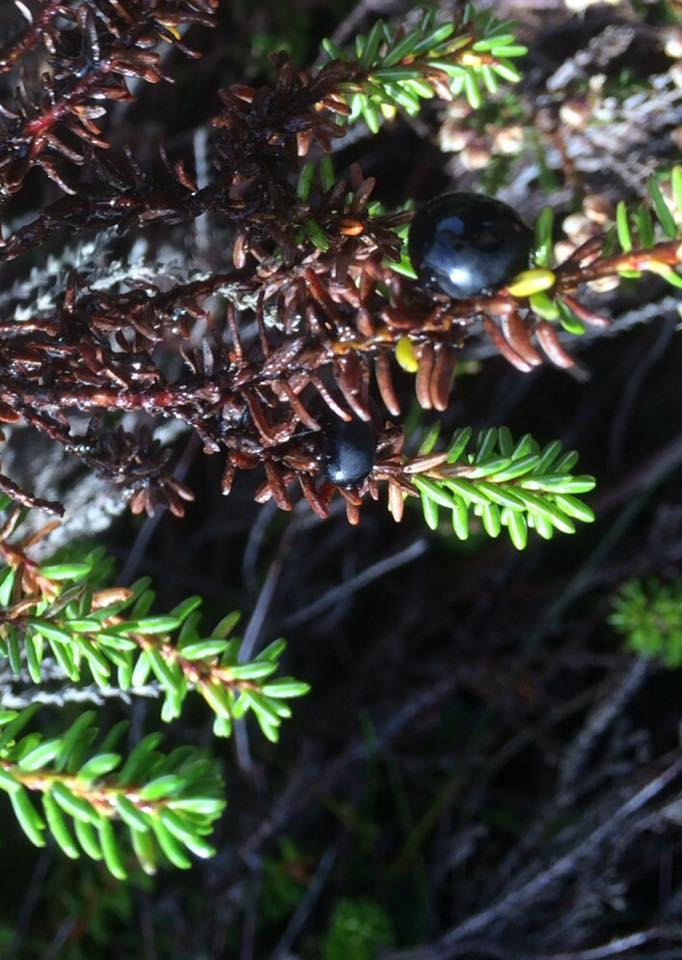 Found growing cheek by jowl alongside the lingonberries on the local moors, this is another low growing evergreen that now comes under the heather family classification. The berries are edible but fairly tasteless and contain little in the way of vitamins, although they do have a reasonable amount of vitamin C and K. They are however a rich source of copper, manganese and anthocyanins, a powerful antioxidant.

The berries have traditionally been used as a natural food dye and are a popular source of nutrition in colder climates such as Alaska, Canada and Greenland. Although the crowberry is the third most harvested berry after blueberries and lingonberries it is almost unknown as a food source outside the arctic regions.

Crowberries have astringent and diuretic effects and infusions of the twigs and stems are traditionally used for colds, kidney disorders and diarrhoea. The Inuit and Sami use crowberry juice or decoctions of the roots and bark topically for sore eyes and to relieve snowblindness. In Russia a medicine for treating epilepsy (Empetrin) is commercially manufactured from the plant.

The berries can be eaten raw and taste faintly like blueberries, but are most often incorporated into other dishes, as cooking them considerably enhances the flavour. The berries will remain on the shrub until the following spring, unless picked, and continue to be edible. Like many berries, harvesting them after the first frosts considerably improves their flavour. Try stewing crowberries with honey and lemon juice and use as a topping for ice cream or puddings. They can also be made into jams and jellies and combined with blueberries or other fruits in pies or crumbles.