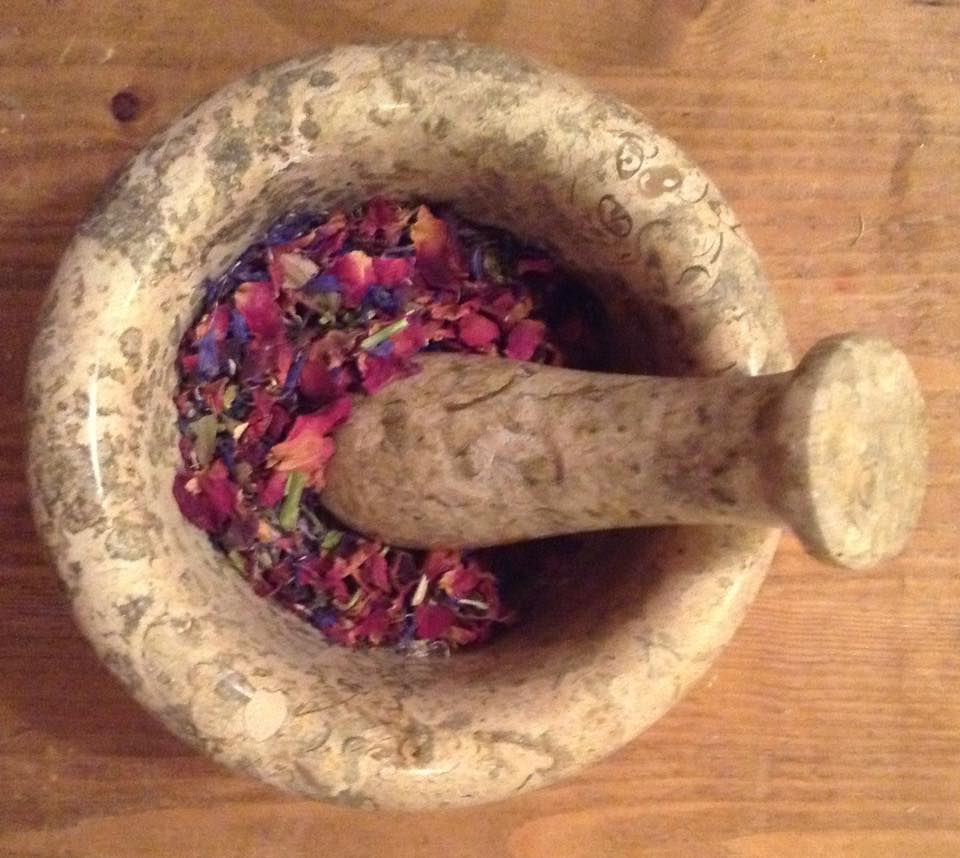 Most of us are familiar with the idea of herbal tea and enjoy a cup of peppermint, chamomile or even some of the more exotic blends on the market. Herbal tea is defined as fresh or dried plant matter which is infused or decocted in hot water. This can be the leaves, flowers, berries, bark, seeds or roots from the plant and can be a single plant or a blend of several different ones. A herbal tea is usually regarded as being caffeine free, or at least very nearly caffeine free. Leaf and flower teas are generally infused in hot water for around five minutes, before being strained and drunk. A few herbs do better being extracted in cold water, such as cleavers. Roots tend to be harder to break down so boiling them for ten minutes before allowing to stand is a good idea. Teas can be taken alongside tinctures but are also useful when, for whatever reason, tinctures cannot be prescribed.

I will often blend a combination of different herbs to suit the individual and their particular health conditions. For example I like to make up a tea for urinary tract infections, where the medicinal properties of the herbs combined with drinking more fluid is highly desirable. In teas such as this I will use soothing and healing herbs such as goldenrod, plantain, marshmallow and horsetail as well as herbs to fight any underlying infection.

Herbal teas have many therapeutic properties, for instance peppermint or fennel are great for settling the stomach, whilst ginger and rosemary have similar actions but are also good for peripheral circulation. Chamomile tea is most commonly used as a sleep aid but has many other uses too including the ability to reduce abdominal and menstrual cramping. It is an excellent herb for children and can ease colic and teething pains in babies. I also used it a lot when my children were small and got tummy pains from anxiety and it was readily taken when combined with honey or apple juice. As a topical remedy Chamomile can be very helpful for eczema, burns and other skin rashes due to its antiallergenic, anti inflammatory and cell regenerative properties. Try using a strong infusion of cooled chamomile tea applied directly to the skin, you can soak a bandage in the tea and wrap it around the affected part or use chamomile tea bags taped to the area. Chamomile tea bags are also a quick remedy to combat eye fatigue, sore eyes and conjunctivitis and a cooled tea bag can be placed on the eyelids for around five minutes morning and night.