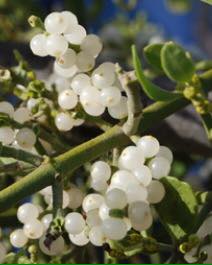 Mistletoe is a parasitic plant that grows on several species of trees although it is most commonly found growing on lime and apple trees in the UK. Its roots reach deep into the vascular network of trees in order to feed on the sap. This can lead to branches dying or even, if the infestation is severe enough, killing the entire host. The Mistle thrush is so called after its favourite food – mistletoe berries, and the hard seeds within the berries are spread through the bird’s droppings. Around thirty species of mistletoe can be found worldwide but it is the European mistletoe or Viscum album that is used medicinally.

Viscum means sticky, and indeed Mistletoe berries are so sticky that they were once used as an ingredient in a paste, known as birdlime, in bird traps. The custom of kissing beneath the mistletoe arises from the Scandinavian legend where Balder, the god of Peace, was pierced with an arrow made of Mistletoe. At the behest of the other gods and goddesses, he was revived and Mistletoe was given into the care of the goddess of Love. Henceforth everyone who passed under it had to give or receive a kiss, this proved that mistletoe had become an symbol of love, and no longer of hate.

Following the Winter Solstice, the Druids would cut the Mistletoe from the sacred Oak tree with a golden sickle. The sprigs were distributed amongst the people who believed it would protect them from storms and evils spirits. It was also believed to have the ability to heal diseases, be an antidote to poisons, promote fertility and bring good luck. In more recent history the berries were used as an ingredient in salves for skin sores and ulcers or for disorders of the nervous system such as hysteria and convulsions.

Mistletoe has been found to have immune enhancing properties and is a plant that continues to be extensively researched for its anti cancer activity. A large percentage of cancer patients in Europe incorporate mistletoe in their treatment programme. It is also a powerful cardiac herb that can slow the heart rate whilst increasing the force of contractility. This is beneficial in some cases of heart failure and can decrease blood pressure. It is a herb that should be used with utmost caution though and only under the supervision of a medical herbalist.

Sadly I haven’t found any mistletoe growing up here as it would appear to be too far north. If anyone finds any growing in my locality please do let me know and if anyone would like to send me some I’d be very grateful too!