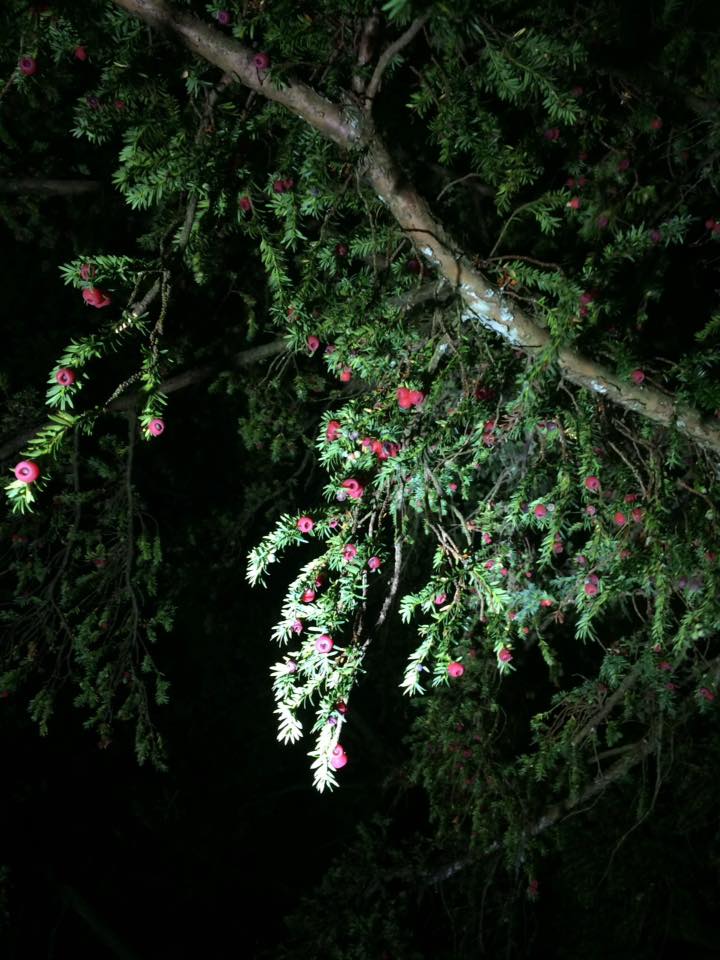 The city name York is a corruption of the Anglo-Saxon word meaning ‘the place where Yew grows’. The tree is often found in graveyards and this may, in part, be superstition as the roots are very fine and were believed to grow through the eyes of the dead, thereby preventing them seeing their way back to the world of the living.

This tree is regarded as highly poisonous to both humans and livestock. However the aril, that is the pulpy, red outer casing that partially encases the brown-black seed is edible and very sweet tasting. The purpose of this is to encourage an animal to eat the fruit and disperse the hard seed intact. Although many of us have been warned of the poisonous nature of the berries, the leaves are also very toxic and this does not decrease when they are dried.

Traditionally, Yew has been used to treat diphtheria, expel parasites and ease the pain of rheumatism and arthritis. Nowadays it plays a very important part in the treatment of cancer, particularly in advanced cases of ovarian and breast cancer. The taxane alkaloids are extracted from the tree and used in chemotherapy treatments. One of the drugs developed from the Yew, docetaxel (Taxotere), was extracted from the needles of the European yew tree and the other, paclitaxel (Taxol) was extracted from the bark of the Pacific yew tree. Both drugs can now be made synthetically in the laboratory, but the needles are still collected and used as part of the drug manufacturing process. The annual growth clippings from Yew hedges, rather than trees, are collected for this purpose from July to September.

Although this tree is of great value medicinally, it is not one to use at home. If you do choose to consume the juicy arils be careful to remove the black seed inside first.